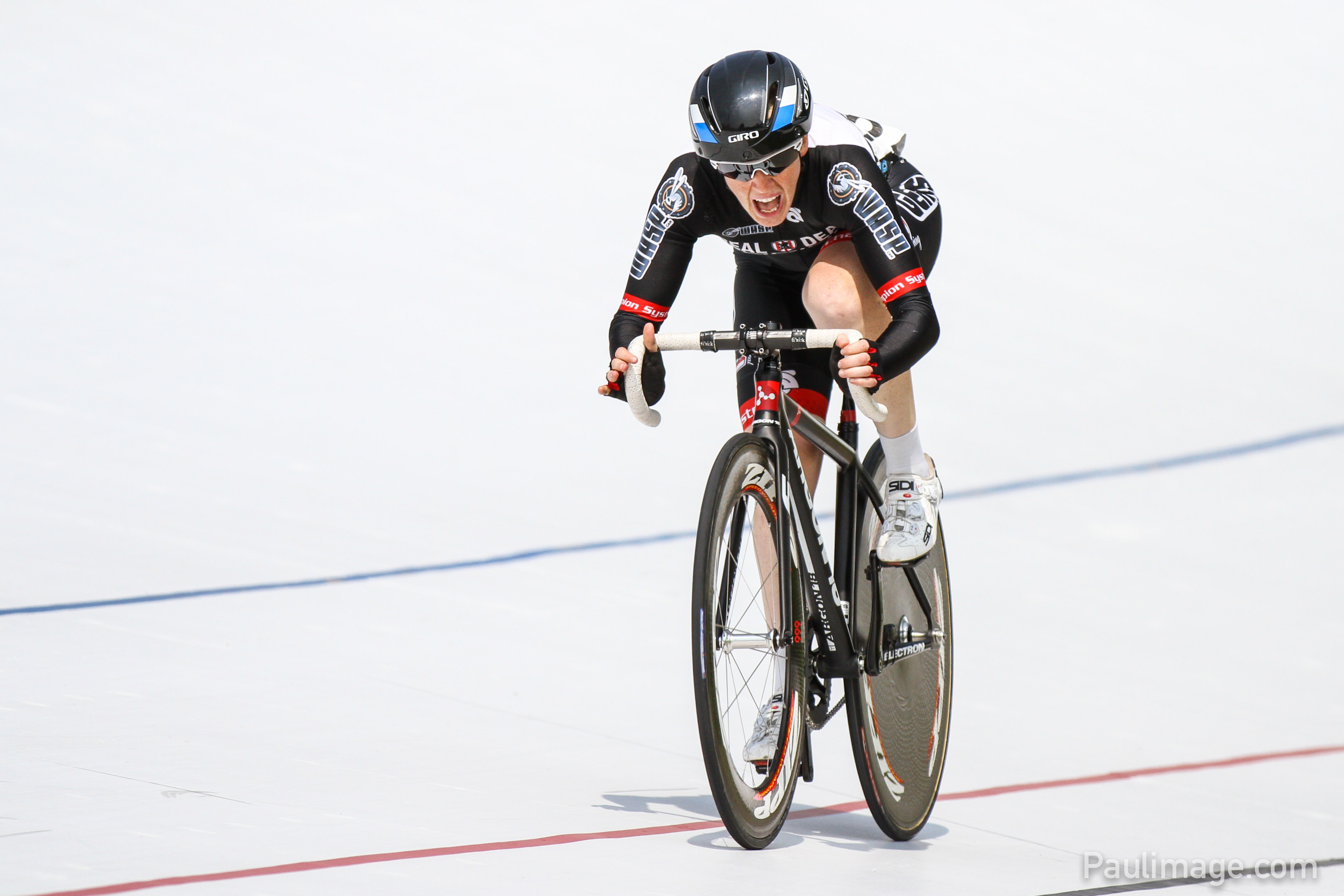 Track season has just started, and it’s suddenly over. Only one race, one short 4-events-1-day omnium, that’s it. This is all I will get in 2014, as unbelievable as it sounds.

August to October was supposed to be the most exciting part of the season. Since the track camp in Pennsylvania I was eager to get back on the track, and race high level omniums. These big omniums were also my opportunities to add up some real results to my resume before the end of the season. Results were just one little thing, I actually just wanted to race!! I just love to race on the track so much. Omnium are like a big bicycle rave to me! I’m not talking about boring individual timed stuff, I,m talking about racing! Attacking, chasing, gunning, cat and mouse, up and down, bing bang bang until your lungs can’t take anymore air!  Well, this fun will have to wait..
*I actually have a lot of respect for individual timed stuff..and I agree it’s actually more complicated to execute than it looks. But that’s another story.

Nothing in my control. It’s just so disappointing. I was in good shape, I am NOT injured, I was ready to give more for one last training block and peak in October. Arrfff….

What happened
First there was the rain. As lucky as we are in Quebec to have a nice 250m track, it’s an outdoor track. Which means : rain = no race. Track Provincials were supposed to be on Aug 31-Sept 1 but had to be postponed to Sept 6-7 because of rain. This forced the organization to cancel completely the Eastern Challenge, which was originally supposed to be on Sept 6-7. So one omnium less on the calendar.

Then again, the rain showed up, and they decided to shrink our omnium so it could fit in one day. Since it would be the only opportunity to record some official times, they cut peloton races! MY races !! Thanks god they kept the points race on the schedule at least!

Then later the same day, another bad news, this time for all Canadian track racers who were as eager as me to jump on our new indoor track in Milton, Ontario. The UCI Milton International Challenge and Track Nationals planned in October will be postponed to early 2015. The construction of the new velodrome is taking more time. My 2 big omniums moved to 2015.

I was a bit nervous about the pursuit, I know it’s my main weakness, but I’ve worked a lot this past year to improve it. I worked a lot on the physical aspect of it, not so much on the technical part. I was keeping that for later. Once on the start line, fire in the eyes, I felt like destroying everything and I started too fast. Way too fast. I knew it was too fast..but suddenly the lactic acid hit me and I was too slow! Totally wrong execution and very very disappointed of how I managed my effort. One thing sure, I gave everything and I really couldn’t give one watt more. What I found to be a terrible performance actually placed me in 2nd !! Wow! And I won’t tell you by how much I beat my time from last year, by a lot.

200m. Now the fun starts. This is my event, no one here will take it from me. After beating my max speed PR on a jump last week, I was looking forward to set a new PR on the 200m here in Bromont. The wind would have decided differently. It got extremely windy and I had to fight much harder accelerating at the top of the track. An okay 13.3 sec for the win. Not a PR.

I was now tie with Catherine Dessurault, one win each, one 2nd each.

Points Race. Now the Real fun starts. 10km 40 laps. Short and sweet. I raced it so well, I made smart decisions the whole time, only gave what I had to give to win. Maybe my good sprint helped me to fight the points with more ease and have a clearer mind but this one seemed so simple compared to what I’ve seen before! I won, with so much remaining in the gas tank! Niceee.

Although Catherine came 2nd again. So it’s 2 to 1 for me, but only 1 point in the omnium GC separate us. There is one last event remaining and it’s another individual effort, to her advantage. It will be tight. It will be her great time trialist ability against my start and sprint.

Countdown on the start line. Boom everything went wrong. I just wanted to win so much. My hamstring started to cramp as I get in the first corner, my wheel bounced. WTF! Then I pushed SO hard to catch up, way too much, I looked on the other side….Im losing. I cant hold the black line, I cant see anything, looked again the other side to see it’s very tight now. I can’t hold the freacking lineeee, I’m dead and now I lost. I made so many mistakes. 500 little meters, and so many mistakes. WHY did I need to look the other side? To see how tight it is? Of course it would be a tight! I’m a very emotional rider, and I believe it helps me more than it causes damage overall. But this time my burning desire to win overtake the concentration I needed to execute it well. The good news is there is a lot of room for improvement. I’m aware of the mistakes I did and will take it as a learning experience. Oh well. I actually came 2nd again! It couldn’t be that bad!

So we were now tie again on the omnium classification. 6 points each. 2 wins, 2 second place each. If we were using the new UCI omnium format, the points earned in the points race would have make me win. But unfortunately for me, they used the old format and regulations. That means, if 2 riders have the same numbers of points and same numbers of victories, then the last event determines the winner. Yes, seriously. So this is how I came 2nd. By a few tenth of a seconds in the 500m. 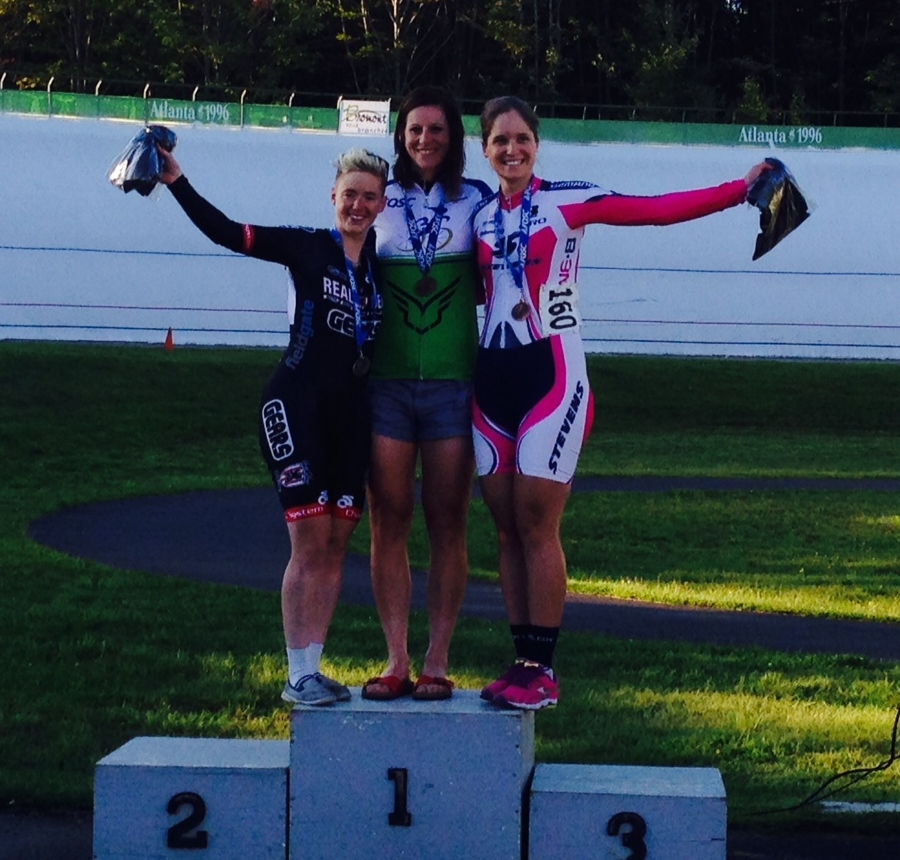 I came so close! The most heart-breaking 2nd place ever. Or not, this was just provincials actually. But what is actually crazy, and what took me a bit more time to realize afterward, is that I came very close, with 2 pack races less in the omnium! (2 races that would have end in a sprint, just like I like to finish a race.) I came that close to the provincial title, when 3 others girls I was competing against that day were invited to a national development team camp just last fall, representing the future and potential talent of the track endurance program. I did not get invited. They forgot me. Hi, I was training at home on a trainer while you guys were on the track. This is how far I have come on my own, with 0$ and a full-time job. Tell me I can’t again just to see!

And now that my 3 other omniums of 2014 are gone, this will be the only result I will have had the opportunity to get.

It’s now time to quickly get in off-season mode, and reload the battery even though I was more ready than ever to start working harder. I will get back to work in a few weeks. See you at nationals in 2015. I am not done with you dear Mr Velodrome.