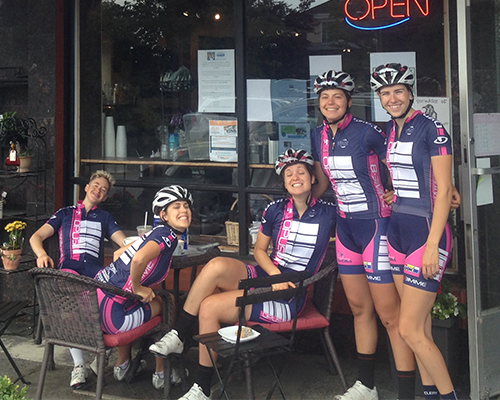 I was guest riding with The Cyclery – Opus for the whole serie of BC Superweek. Each riders had to pick a race and write a race report for the team blog. Here is my race report for Brenco Crit, the 2nd crit of the series. Written too shortly after the race, oupelaye!

Brenco Crit. My first blog post as a The Cyclery –Opus rider. Let me catch my breathe first. I still hear the sound of the bell, the noise from the crowd, shifters and derailer going clic clic clic bam bam bam. This one crit really drained me, mentally and physically, I’m still feeling blown up and overwhelmed as I try to tell a story that makes sense. The story of a crazy fast drag race, one of the fastest of all crits in the world probably!

Haha, well yeah, the course was designed to be fast : quadrilateral with 2 wide and round corner. No one would get away tonight. There was a lot of movement in the pack, one moment we could be at the front, the next lap we would find ourselves too far back. The positionning, no, the ‘’stay on this wheel or stay at that position’’ was the big challenge. Roads were so wide we could always move up. People would move every lap, attacking every lap or so, it was just a matter of moving around as efficiently as possible.

If I had made huge progress in my cornering skills over the last year, playing in the traffic is still something I need to work on. I had 2 options : the wind, or the back. I took the wind for the most part of the race. It hurt, it does. But it never hurt too much. 20 lap or so to go, PRIME lap. Who’s gonna go. Someone from whichever team that I can’t remember starts the show and set a pace that will save her spot at the front until the last corner. Laura van Gilder gets out of the saddle, I slot in her wheel and this is it. Only the 3 of us will be fighting for it. 200m to go I’m waiting for Laura to go and get around. That one second of hesitation. Shit, this is where I lost. I came around as fast as I could, dug as deep as I can rarely dig, and throw my bike on the line as if I was sprinting for my life. But Laura got it. Shit. Lesson learned.

Then I really started to lose my mind. Until the end of the race I had no idea what happened. I remember seeing different colors everywhere, wheels so close to each others in each of those last 2 tight turns. I had dug so deep that I could feel the lactic acid in my stomach, you know that burning feeling, deep down in your guts. I had passed the no-returning point and I wouldn’t be able to swallow anything til the end.

If last night (MK Delta Crit) was super well done as a team, tonight I’m not sure, I was too blown up to understand anything else. All I know is there was pink moving around the whole race and pink attacking and pink covering stuff and pink here and there, but it still pretty vague in my memory.

It started to rain. My wheel slipped, I don’t know how I could save it. But then I felt a wheel against my rear wheel and that was it, many riders went down, including a couple of my teammates. Everybody was fine and they all got back in the bunch.

I had no idea how many laps were left, I would never remember where the freaking lap count was or would forget to check. I think I saw 8 to go. Then I heard 2 to go. I was surviving, moving up moving up moving up, take the wind where there is space, up and up and up again. 1 to go I’m gonna die. I got to the front, well near the front, the « front » was a large amount of rider all going side by side trying to be at the « front » then we all slot in for that second to last turn, took the last turn in 7th maybe, then sprinted for 6th.

That was all I could do, not a single watt more. And that’s the best I could do for a first blog post with a broken english and blown up brain. Have a good night. I’ll be back in top shape just in time for the next crit, believe me.