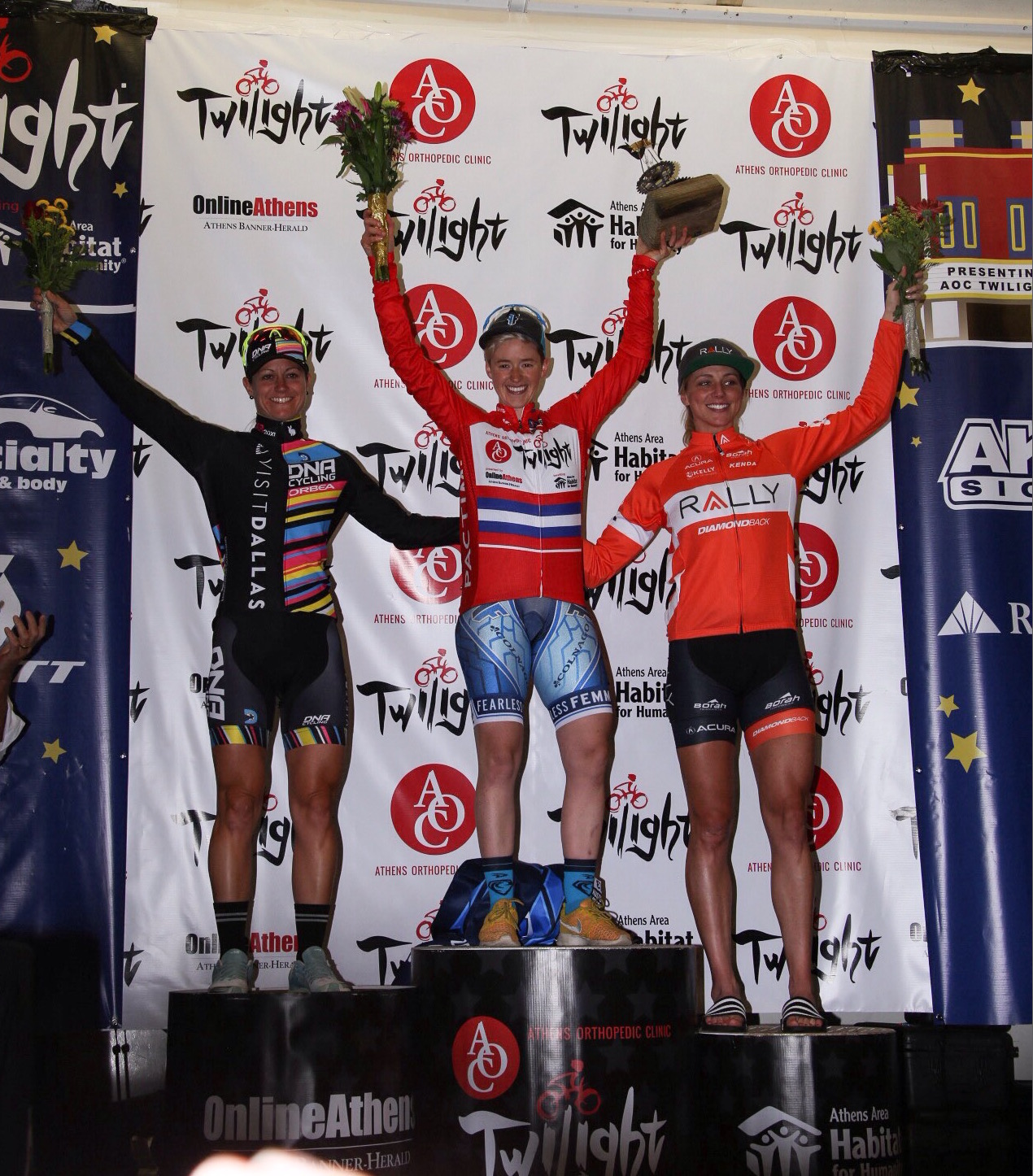 One last lap to go, the bell is ringing. The crowd is louder than ever. Everywhere along the course, I can hear people cheering « GO BLUE! ». I have goose bump: in just a few moments I will win Athens. My first pro win, in Athens. It would be a huge milestone for me. Then I come to my senses, I still need to win the sprint. I’m calm and lucid, my breath is relaxed, my legs are feeling good, they’re actually feeling great, ready to bite. One more minute. I feel confident, I believe in my tactic, in my legs, in the crowd cheering for me, this is my moment. There is only one scenario in my mind.

My breakaway companion let me go first before the last two turns, I take the front without insisting. I have learned to win a match sprint from the front and that’s what I’m gonna do. Going out of the final turn, I wait for her to come around so she doesn’t use my draft. Side to side, just a wheel ahead,  250 meters, it’s now, one last gear « click », and we’re going. I match her acceleration, and I match and I match, one wheel ahead. I have more in my legs. Come on give me everything you got. 30 meters she’s starting to fall back, and my gap is bigger and bigger. I cross the finish line and suddenly I realize what just happened : I WON ATHENS !!!!!!

If we go back in time, my spring did not actually go as planned. Just when I thought all stars were aligned for 2016, there must have been one I didn’t see because everything fell into pieces suddenly. My Californian adventure came to a short end for reasons that are not worth explaining. I found myself empty-handed, one month from the start of the season, no bike no team.

I came back home, I took my track bike and got on the rollers. I would not do the early season races to prepare for the summer like everyone else, but I didn’t care because I would have fresh legs and this will be my advantage. I believed in it so much! Fortunately, I could count again on my 2nd family at Cycle Neron to build me a fast machine, a Specialized S-Works Amira, just in time for Speed Week.

Few days before leaving, the team Fearless Femme, based out of Lambertville in New Jersey offered me to race the series with them as a guest rider. The chemistry within out small group was instant. Races after races we slowly learned how to work together.

The 5th race at Spartanburg had been a magical night. We had raced with so much heart and grit, we created a big surprise by catching up the break with just a few laps to go. The announcer and the people from the crowd told us we had stolen the show, they had seen a lot of blue! We didn’t get the actual results we were hoping for, but that was secondary. What mattered is what we had built during the week.

Later in the evening with the team, the ambiance was festive, everyone smiling. Even Amy with her broken elbow had a big smile just to be here and live the moment with us. It reminded me of my best moments in hockey, the few times in my career where I had been part of a team with an exceptional chemistry. We win as a team, we lose as a team! It gave me hope in a certain way because, to be honest, I hadn’t experienced it so much yet in cycling. For that blue skinsuit, I will give every single watt I have! It’s crazy the effect it does.

The next morning in Athens, I was particularly febrile. I remember my first crit in the US here in 2014, when I was dropped out of the race after just a few laps, and I think of how far I’ve come since then. We haven’t discussed the game plan for the night yet, but one thing we are sure of, we’re gonna give it all. And for the occasion, I brought my best legs.

Actually, it was not our initial plan to breakaway (and win!), we were racing for Jess. It kind of just happened and everyone was taken by surprise when they realise we might make it to the finish. Even I was surprised. That win was like an enormous gift, as if everything had been brought to me on a silver platter, and I just had to take it. I was speechless. That was the best gift we could offer us to end this amazing week.

And to conclude, that’s also the best gift I could have offered to everyone who had been with me since the beginning, everyone who had supported me, taught me, sponsored me, cheered for me. Thanks so much, this one was for you!

A week later at the Wimington GP Criterium, let’s say I had found myself in a good position to be invited again with the team. But this time, everybody knew what I’m capable of, no more surprises.

Lucy launches the first attack as planned, we all regrouped, then the counter-attack goes and it’s my turn to jump. And there we were, 5 girls in the early breakaway and we would make it to the end. I went to grab my 2nd podium pro in 7 days. Crazy!

The big difference, and what made my start of the season exceptional had been wearing that blue skinsuit, with my teammates behind watching my back, and our director who believed in me and gave me a shot. A huge thanks to the Fearless Femme team for these 3 amazing weeks. I let you guess which team I will be racing with at the Gatineau GP next week :)  GO BLUE!