Last tuesday was the final of the Lachine crit series. It was just a tuesday night in Lachine. But I wanted to write something about it while it’s still fresh in my memory, to make sure I never forget that night, make sure it stays forever tangible. In a few years it might be funny to read this again…it was just a tuesday night in Lachine! Anyway.

The Lachine crit series, one of the most well-known weekly crit series in the world apparently, or maybe that’s just what they like to say. Definitely the biggest in the area! But it’s also my weekly crit series at home. This is where I started to learn to race crit. This crit has been happening every tuesday night, from June to August, for the last 37 years. That’s a lot of history!

Back in hockey I had a coach who taught us to have what he called a treasures box, if that’s a correct translation. This treasures box is where we keep all our best memories, best performances and accomplishments, it’s where we keep the handful of moments when we felt on top of the world. These moments are gold, and they never gonna leave you. He would remind us all the time to use our box. Use it when you feel low, use it before an important event, never forget what’s in your treasures box and use it as much as you need. Last tuesday I added one thing more to my precious box. Not the victory, but the memories and feelings about it.

Cycling and hockey are very different. We practice a lot more than we play in hockey. We practice everything, over and over again, until the play is perfect. If one pass is not on the tape, the coach blows the whistle, and we start again, and again, until it’s perfect. It’s about execution. In cycling you never practice. You train, then you race. If you’re lucky you just race. But no race is the same, no corner is the same, no pack is the same. You cannot practice 10 bunch sprints like you can do 10 slapshots in a row. A race is one big play. You cannot wait for the zamboni to breathe, settle your mind and adjust your strategy. No face off, no change, one big play. And it gotta be perfect from beginning to end. Tic-tac-toe shoot and score.

Unless it’s a weekly crit series. Booom! Every week, over and over again the same course, same turns, same riders. I don’t know how many times I’ve done it. Dear corner 3, I know everything about you now. My first and only time in 2012 was a disaster. Then last year I went from not finishing or barely surviving, to….make it to the bunch sprint. And I thought I was close! No. There is a big gap between top 5 and first. So anyway, all those practices, I took them as practices, made it a different game. An execution game. And once I found how to win, all I needed to do was repeat and execute the same plan. The 3 wins I got in a row (stage 7, 8, 9), had the exact same finish. Execution game.

Before each of those win, I always had a doubt I could maybe not win. There are other very good riders in the pack too, you’re never sure to win. I think it’s ok to have a doubt, and give respect to the opponent. Fear to lose just a little.

If there is one other thing I learned from hockey is to associate your best performances with the state of mind and feelings you had, before and during a competition, so you can inspire yourself from that « magic » feeling you had before, and try to re-create the same feeling that gave you the best results. I know exactly what is the « magic » feeling I need to perform, and I was exactly in that zone : I was calm, focused, strong, confident and unbeatable. It reminds me of a few big hockey games where I had felt like this, but I don’t think I had ever experienced that on a start line before in cycling. I hope I’ll be able to get in that state of mind again in the future. I will.

A few paragraphs later and the race haven’t started! So I got there, a lot of people already comfortably sitted to watch the show. 83 riders on the start line. Being called in front of a 83 riders pack is not a bad thing! Such a big field made it a guys race. Because that’s the other thing: we race with the cadet boys. So the strategy is slightly different than a regular race. There are 2 races going on at the same time, you gotta read both, use the guys to race the girls. 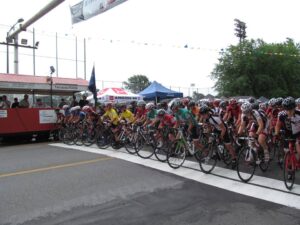 The pace was fast, several small attacks one after the other, from the guys. It was like a flow of attacks and I was just floating at front of the pack, letting the guys jump and use the space they left to move around and get in every train that was moving faster. I followed my plan and let it go on the intermediate sprints. It was a 100 points deal on the finish (double point than usual for the final stage), 4-5 points for the intermediate did not matters. My plan was to be there on the intermediate sprints just to not miss a break or to not give any opportunity to attack me. But I would not fight for those points. I felt like going, my ego wanted to go, but it was wiser to stay in the wheel I was in, and let them spend precious energy…

5 laps to go it started to rain. Fresh rain = slippery road. I was expecting it and ready for it, it was okay. I’m 4-5th wheel or something around that, coming into corner 3. The guy in front of me, yellow jersey, slipped down. I skidded until the sidewalk, did not « crashed », but lost a lot of time getting back on the road. I should have ask for a free lap but I rushed to get back in instead. Bad idea. The lead pack had a gap now. Shit, full gas! 2 laps to go I’m back at the front as we get in corner 3. 2 wheels in front of me, they go down again. This time I skidded better, on the inside! I quickly got back in position. 1 to go, bell lap, I’m there, nothing can happen anymore. I already recovered from the only one effort I did when I chased to get back, I’m feeling good, great… I’m super calm, I know what I have to do, I know what’s going to happen. It’s fast, no girls can move up at this point, or they are killing themselves if they do. I’m sitting in 5th wheel with the guys. Coming into corner 3 for the last time. They F!@#?&* go down again !!!! Skid until the sidewalk… I seriously thought I was going down too this time though.. No idea how I avoided that for the 3rd time. Then I saw the pack passing as I clipped in again.. I couldn’t believe it. My victory was all gone, I lost, I would get to the line in last… They just took my win away with them when they slipped down. I felt stolen.

Then I saw the red jersey (2nd in the GC) getting out of the corner. I gotta catch her. I have no idea where we stand in the points now, but I better keep my yellow jersey! I desperately caught her up, crossed the line mad and disappointed.

I couldn’t believe they went down 3 times within the last 4 laps.. like, come on!! Then later, I thought…you know what, last year I went down in that corner 3, on my own, like a rookie who don’t know how to corner. Maybe we all have to crash in that dear corner 3 before we know how to do it right. Maybe.

It’s only later that I learned I actually came 2nd, surprisingly! Many riders were lapped but I didn,t know. But that didn’t make me feel any better. I just lost. Last or second is not first. I was apparently not happy when Marc-Wayne came and told me « Hey! You won the yellow jersey, you won the Lachine GC! And you know what more, you did not crash!!! » Hahahaha, thanks Marc-Wayne, I forgot. Hey, I won the friggin GC! Just a few weeks ago I had never won a race. Seriously, I had never won a single friggin race. Now I win the GC. I didn’t crash, everybody came to watch the race, they’re all here, and they’re all super happy for me! It’s awesome! Lets celebratee!!

So it turned out to be a great night! I have nothing to regret. The crashes were out of my control and I never put myself at risk. I did all I could to stay out of « trouble ». I was in the position I wanted to be the whole time. Everything else was out of my control. I raced just so well. Nothing even close to where I was just 3 months ago. How can’t I be satisfied! My timing, my reading, it was pretty good, if not perfect! And that’s the most important. If the process is good, the result will follow. Focus on what you can do, be ready, stay focus, execution execution execution.

It’s funny how it felt like a big deal. It was just a tuesday night in Lachine… People made it feel like a big deal. The podium was giant, the ceremony lasted forever, fireworks everything! All the messages I got, before and after. It’s crazy!! I want to thank again everyone who came out and cheered for me. Much appreciated!! This one goes right into my treasures box :)

It’s probably my « biggest » achievement so far, but I know it’s just a weekly crit series, and I know it’s nothing compared to the big goals I want to accomplish in cycling. I’m glad to have the 2014 Lachine GC checked and behind, now I want to reach another level. Next year I want to take the start with the pro men and be among the very few women in history who finished it.

There are 2 things I want to remember from this race and the whole series : the incredible unbeatable calm and confident warrior feeling I had on the start, and the perseverance that brought me from learning, to practice, to execution, to winning and winning and winning!